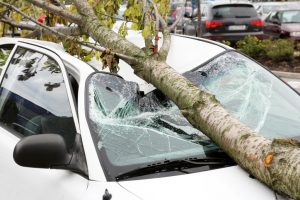 BURBANK, California — A call reported last Friday night at 9:19 p.m. for a tree crush incident. A palm tree fell down on a vehicle squeezing it and hurting a woman inside at Olive Ave. and Lakeside Drive. There was a heavy weather of rain and strong wind in the area at the moment of the incident.

At the scene, a Mercedes convertible was found with 2 people inside the car. The tree landed near the woman on the passenger seat and missed driver’s seat.

Right after the police report and victims’ transportation to the hospital, at the scene arrived firefighters from Warner Bros. A treatment assisted for both the man and woman by medics at the scene, according to Battalion Chief John Owings of the Burbank Fire Department.

The woman which was injured after the incident was taken to a local trauma hospital in critical condition. There is no current information about the woman’s identity. The condition is the same – critical. The driver was taken to the hospital as well. He suffered serious injuries.

There was the second vehicle crashing the fallen tree.

The driver of the Mercedes was turned out to be Jonathan Ortiz, 29, which was later found to possess a handgun and narcotics while parole. After the injury-treatment, he was arrested and transported to the Burbank City Jail. He is booked for handgun possession, meanwhile, narcotic possession. O bail is set for him at this moment.

According to the Burbank Police Department, the cause of the tree to fall is not known and will be determined shortly.