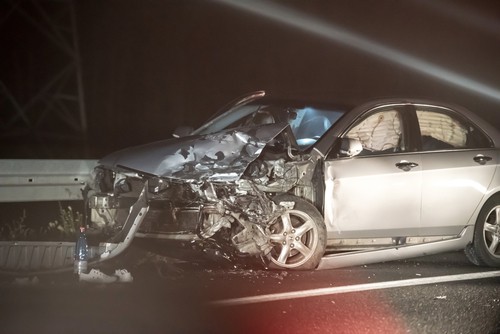 The crash closed a portion of Pacific Coast Highway for hours. It was reported at 1:08 a.m. near Magnolia Street, according to the Huntington Beach Police Department.

A white sedan was northbound on PCH when it struck the rear of a red Toyota, which caused it to crash into a traffic signal and burst into flames. The driver and two others in the red Toyota died. The victims were identified as Brooke Hawley, Dylan Mack, and AJ Rossi.

The teenagers were on vacation and visiting Southern California for one last outing as high school students before graduating from Centennial High School in northwest Las Vegas.

“They were on spring break,” a friend of the victims, Kelsi Hall, said. “You’re supposed to go here to have fun. Who would have known they never come back?”

A fourth person in the Toyota was able to escape the vehicle and was transported to a hospital, where he is reportedly in stable condition.

The driver of the white sedan, 27-year-old Bani Duarte of San Clemente, was arrested on suspicion of DUI. She was booked on suspicion of gross vehicular manslaughter while intoxicated and driving drunk. She did not suffer any injuries.

A vigil is scheduled to honor the teenagers at 6 p.m. Friday, March 30 in Las Vegas.

Over 20 People of MS-13 Gang Arrested after Long Investigation