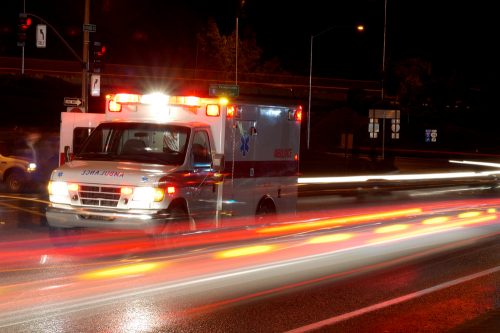 Barrett Riley and Edgar Monserratt, both seniors, were traveling near an area known as “dead man’s curve” in Fort Lauderdale Tuesday night when their all-electric Tesla Model S hit a wall and burst into flames, officials said.

The boys, 18, died while trapped inside the burning vehicle, according to witnesses. One onlooker said he saw the victims moving and trying to escape from the flames, but no one could help them break free.

A backseat passenger, identified as 18-year-old Alexander Berry of Fort Lauderdale, was thrown from the car and taken to a hospital with undisclosed injuries, according to local news.

Speed may have been a factor in the crash, the NTSB said Wednesday. Its investigation will primarily focus on the emergency response in relation to the electric vehicle battery fire, the agency said, adding that it had plans to have a team of four investigators in South Florida by Wednesday night.

Tesla released a statement Wednesday, saying, it was “working to establish the facts of the incident” and offered its “full cooperation” to local authorities. The car’s autopilot feature was not engaged at the time, Telsa said.

The teens, both students at Pine Crest School in Fort Lauderdale, were a few weeks away from graduation. Riley, the driver, was set to attend Indiana’s Purdue University in the fall, while Monserratt was headed to Boston College in Massachusetts.

Larry Groshart, who said he witnessed the crash, told the car appeared to travel between 50 and 60 mph.