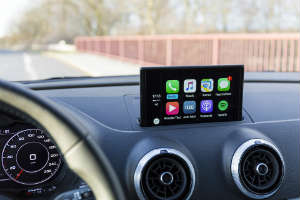 Apple’s got a new project in the works… and they’re being pretty secretive about it. The name? Project Titan. Apparently, the big technology company has started testing new self-driving cars in California. Just this week, they released a voluntary safety report to federal regulators. While this report gives more information about what they’re working on, it only gave a few insights into their new product.

Many other companies submitted similar reports lately, but with much more details. But, since the US National Highway Traffic Safety Administration (NHTSA) made these disclosures totally voluntary, Apple doesn’t have to give much information. Companies only disclose what they want to disclose.

However, there’s some information that we do know! Apple’s Project Titan reportedly began with the goal of developing a purpose-built self-driving car. Later, they dialed back the plans to only developing software. Then, they planned to partner with car manufactures, like Volkswagen, to build the actual car.

But, last month, some drama occurred within the company. The FBI accused an Apple employee of attempting to steal company secrets. And, these secrets were related to the self-driving car project. In fact, the government accused a different employee of the same thing several months prior. As a result, Apple has laid off about 200 employees from Project Titan.

So, things have been changing within the project and the company. However, Apple is still progressing in their work on the project. Rather than focusing on vehicles, Apple is describing Project Titan’s focus as “autonomous systems.” And perhaps the project goes beyond cars. They even described it as “the most ambitious machine learning project ever.”

Solar-Powered Electric Family Car Taking Over The Streets For $5,800