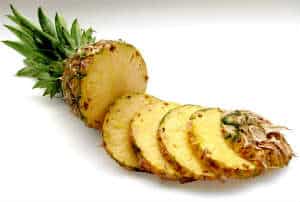 NATIONAL CITY, CA – A truck filled with pineapples ended up tipped over in an embankment Thursday morning in the National City area! So, how did this happen? Essentially, a semi-truck swerved off of Interstate 5. And when the truck swerved, it then fell. As a result of the fall, it rolled down into the embankment. In fact, it actually landed by multiple power-lines. Due to this, officials closed streets in the area surrounding the crash. They did this as a safety precaution.

The pineapple truck was carrying product for the company, Dole. And, the crash occurred just after four in the morning on Thursday. The truck traveled northbound on I-5, near Main Street right before the crash occurred. This information comes directly from the California Highway Patrol who reported the incident.

According to the driver of the truck, a tire blew while he was transporting the pineapple product. As a result of the blown tire, he lost control of the semi-truck. This caused the truck to veer off and then roll into the embankment. However, the truck also crashed into another automobile during the incident. Before going off a hill on Roosevelt Avenue, the truck hit another vehicle.

Luckily, no injuries resulted from this crash – neither the driver of the truck nor the driver of the other vehicle received any injuries. But, officials towed the semi-truck away from the scene of the incident. In the end, the biggest thing that the crash created was a mess!

More Evacuations in California: There are 19 Wildfires Throughout the State