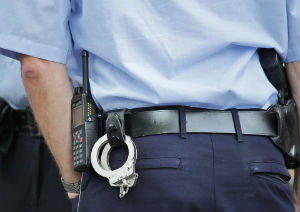 Police shot and killed a man in downtown L.A. on Sunday afternoon.

Two officers fatally shot the man at around 2:15 p.m. near the intersection of 7th and Hope streets. Officials closed off several blocks around the area in the aftermath of the shooting.

According to the Los Angeles Police Department’s official Twitter account, the incident began when two transit officers working in the 7th Street/Metro Center transit station reportedly saw the suspect armed with a shotgun. The suspect was also wearing a large black backpack.

Both officers initially pursued the suspect on foot. They then chased him once he fled from the station. The chase concluded on South Hope Street, about one block away. According to LAPD officials, this was the location of an officer-involved shooting.

Officials report that the suspect refused to comply with officers in the moments before he was shot to death. It remains unclear if the suspect fired any shots at all during the shooting. Still, one nearby male witness described hearing at least two or three gunshots from the area where the incident took place.

The suspect has since been identified as 47-year-old William Crawford. Crawford was pronounced dead at the scene.

Video footage from the scene showed multiple bullet holes embedded in the wall of a nearby Rite Aid store.

Investigators called to the scene were able to recover the shotgun from the deceased suspect, as well as multiple rounds of ammunition.

No injuries to officers as a result of the shooting were reported.