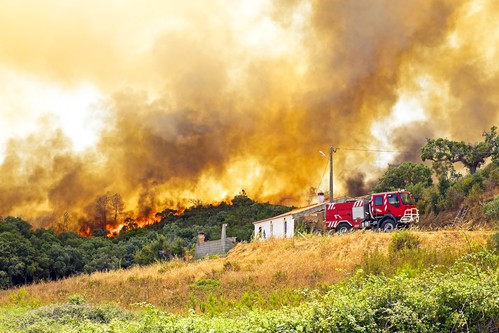 MOUNT WILSON, California — A brush fire exploded near the Mount Wilson Observatory early Tuesday morning, prompting an evacuation of the historic facility as the blaze burnt heavy brush down the hillsides.

The fire, which broke out shortly before 4 a.m., burnt along the hills above Altadena, Arcadia and Pasadena.

The observatory has been evacuated, officials said, and the fire is not burning near foothill apartments. Officials were not sure how many people were inside the observatory at the time.

Sheriff’s officials said they sent deputies to check nearby campgrounds to see if evacuations were warranted.

Firefighters said the blaze has the potential to grow up to 600 acres.

The fire started near the top of the mountain and inched slowly toward communication towers near the Mount Wilson Observatory.

Teams from the Los Angeles County Fire Department and the Angeles National Forest battled the flames with water drops from helicopters equipped with night vision technology before sunrise.

Approximately 500 firefighters were battling the brush fire. They were aided by light winds and cool morning temperatures.

No injuries were reported, and the cause of the fire was not known.

The glow of flames and smoke was seen across the Los Angeles basin and surrounding valleys.