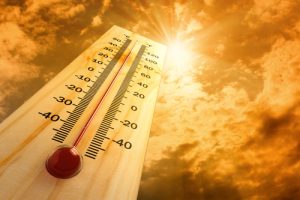 A sweltering summer heat wave scorching the Southland has triggered excessive heat and red flag warnings in our region.

An excessive heat warning is in place for several areas of the Southland, including the San Fernando, Santa Clarita, San Gabriel and Antelope valleys, as well as the Santa Monica mountains and Ventura and Orange County coasts. The warning is expected to last through 9 p.m. Saturday.

In addition, a red flag warning has also been issued for the Los Angeles County Mountains, Angeles National Forest; Ventura County mountains and Los Padres National Forest until 6 p.m. Saturday. The alert means there is a fire danger, especially in some mountain areas where a wind advisory is in place through Saturday morning.

Authorities advise people, especially those with health issues, not to go outside. For those without air conditioning, a list of cooling centers in Southern California is available here.

Heat waves usually drive people to the coast looking to cool off, but authorities are warning beachgoers about a high surf advisory in effect through Friday night for the coasts at Orange, San Diego, Ventura and Los Angeles counties.

The heat wave can also be very dangerous for pets. The best advice is to keep your pets inside, give them plenty of water and never leave them inside the car.

Firefighters continue to fight the County Fire, which has grown in size to 88,375 acres with 37% containment as of 6 a.m. Friday.

Mandatory evacuations remain in place for residences served by Highway 128 between Monticello Dam and Pleasants Valley Road, west of Highway 16 to Berryessa Knoxville Road, south of County Road 40 and north of County Road 53. Nearly 3,500 fire personnel from 73 crews had stepped forward to attempt to contain the County Fire, which began Saturday in Guinda.

The Pawnee Fire has chewed up 15,000 acres of Lake County land but was 92% contained as of Thursday night. It had destroyed 22 structures, threatened 50 more and left one person injured as of Wednesday morning, according to Cal Fire.