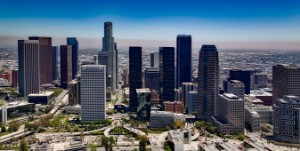 LOS ANGELES, CA – A water main in downtown Los Angeles burst on Tuesday, causing quite a disruption for people working in the area. Crews were immediately brought in to deal to deal with the issue. They worked feverishly to try and contain the break.

The Los Angeles Fire Department originally responded at around 3:30 a.m. to a called in report that the intersection of 11th and Main streets were flooding. According to officials, they say what appeared to be about a 12-inch main break ended up allowing water to spill out wildly onto the street. It quickly filled up the intersection, causing all sorts of traffic disturbances. In fact, some of the services nearby were affected by the sudden flooding.

Witnesses near the location report that the road appear to even have buckled in some areas, which further produced issues.

In order to address the issue Third Street was shut down between 11th Street and Olympic Boulevard. Doing so allowed work crews to evaluate and monitor the damage. This information comes courtesy of the Los Angeles Police Department.

In a prepared statement the Los Angeles Department of Water and Power said, “Once condition of the road has been inspected and deemed safe, and one of traffic in each direction will re-open.” The crew of workers anticipated getting nearby water and electric services restored by around 1 p.m. This news is according to the LADWP itself.