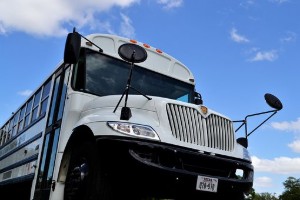 SIMI VALLEY, CA – A charter bus delivering a group of school children on a field trip to the famed Reagan Library wrecked Tuesday morning on the 118 Freeway. The accident occurred in Simi Valley and five people were injured. The event caused highway gridlock for several hours.

According to local officials, none of the injuries suffered were severe. Though four people were moved to a nearby hospital to receive treatment. The fifth person refused to be transported for medical care.

The Ventura County Fire Department says the accident occurred just before 9 a.m. near Madera Road on the westbound 118. Fire officials noted that the students were headed on a field trip to the Reagan Library.

In addition to the bus, there were a total of 3 other cars a part of the wreck. In total, 43 people from the four vehicles, were included in the wreck. The bus contained 33 children and seven adults. The children all were 5th grade students from Horizon Elementary School in Bakersfield.

The result of the crash left the bus pressed up against a hillside. Unfortunately, this positioning prevented the kids from exiting the bus. The Fire Department’s Urban Search and Rescue team were able to stabilize the bus while the pulled passengers from a window.

It remains unclear how or why the accident happened. The investigation is ongoing. Also, around noon westbound lanes of the 118 Highway were again open to traffic.

More Evacuations in California: There are 19 Wildfires Throughout the State