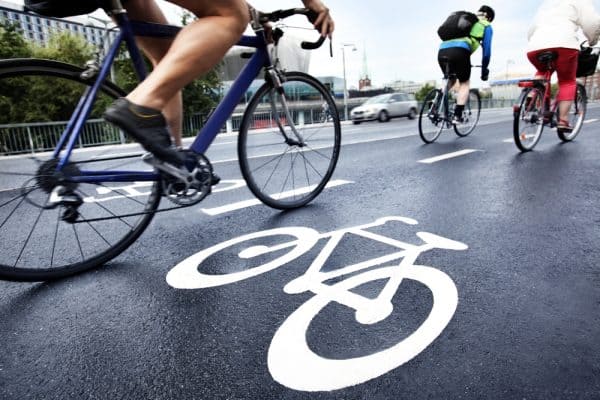 On Tuesday the city council unanimously voted to continue its bicycle-corral pilot program in Magnolia Park in February. The city stuff continues looking at the advantages and drawbacks of having on-street bicycle parking.
Burbank’s assistant community development director of transportation, David Kriske told council members that the bicycle corral in front of Tony’s Darts Away at 1710 W. Magnolia Blvd. was installed this past February and had been used by the restaurant’s patrons on an everyday basis.
Kriske said that though the coral takes up one parking space on the curb in front of the restaurant, it can hold about 14 bicycles.
According to comments made by staff during June and July, there were as many as 16 bicycles parked at the corral one night.
Kriske said “Bicycle corrals can provide significant bicycle parking capacity while preserving the sidewalk for other uses, such as outdoor dining or expanded pedestrian access. In certain instances, bicycle corrals can provide overall parking alternatives for constrained vehicle parking in the same area.”
Nevertheless, Kriske added there are still days when there are just a few bicycles or no bikes at all using the corral.
Kriske and his staff received 21 comments regarding the corral, during the six months of the pilot program. There were 18 people in favor of it, stating that the fixture provides community, environmental as well as health benefits to the city. They also stated that they would like to see more carols in different areas around Burbank.
The other three people said they did not like the corral for many reasons, including its lack of visual appeal, its potential to hamper emergency access and their concerns it won’t be used.
Vice Mayor Emily Gabel-Luddy offered city staff look for more visually pleasing bicycle corrals the next time the city decides to obtain them.

Woolsey Fire Reaches Up to 8,000 Acres, Stretching to Malibu Through 101 Freeway