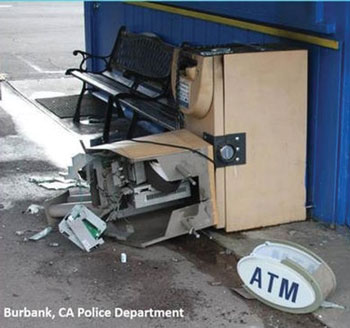 Police have arrested a man who allegedly used explosives to rob ATMs in the Los Angeles area. According to sources, Yakov Rozenoyer, 35, is said to have used some form of explosives to gain access to ATMs in Burbank and Los Angeles.

The investigation into the robberies, conducted by the Burbank Police Dept. and Los Angeles County Sheriff’s Dept. Arson and Explosives Detail, gained momentum when Rozenoyer’s vehicle was identified by surveillance camera tapes. Detained a few days later by security at a Macy’s department store on an unrelated charge, Rozenoyer was noticed by law enforcement officials who responded to the store’s call. Fresh burn marks on Rozenoyer’s hands gave him away.

Although the technique is more common among criminals in Europe and Africa, the use of explosives in ATM-related thefts is relatively rare in the U.S.