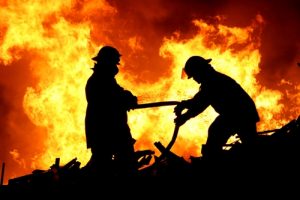 A firefighter from Utah dies Monday when battling the largest California wildfire in the state’s history. The Mendocino Complex wildfire left fatalities that have a grim toll on first responders.

The firefighter whose name is not known yet was injured when working on a Ranch fire within the massive Mendocino Complex. The Police Department airlifted him where he was later dead.

Sean Kavanaugh, an incident commander for the complex said that they are extremely heartbroken for this loss and that they are committed to investigating what was wrong. “We mourn as we also battle California’s largest wildfire that continues to burn extremely steep and remote terrain.”

The Mendocino Complex Wildfires made up of the Ranch and River fires by Monday include more than 328,000 acres. It destroyed more than 139 homes and left 2 firefighters hurt. It was 67 percent contained.

During the Carr Fire, a firefighter from Redding, a bulldozer operator and a Pacific Gas and Electric utility worker have died. The wildfire destroyed over 1000 homes in Shasta County.

It’s been an explosive summer in California, adding to a year of unprecedented fire destruction. Since last fall, thousands of homes have been lost and more than 40 people killed from wine country down to Ventura County. In addition to the lost firefighters, four civilians — including two children — died in the Redding fire.

July and August have been fueled by record-setting heat, which has left brush bone dry and highly flammable.

The conditions have taken a toll on firefighters, who say they’ve been stretched thin as new fires keep breaking out.

On July 14, Braden Varney, a heavy-equipment operator with Cal Fire, died in rugged terrain while fighting the Ferguson blaze. Varney was driving a bulldozer cutting firebreaks when the machine overturned.

As the Carr Fire exploded into Redding neighborhoods on July 26, Jeremy Stoke, a fire prevention inspector, was killed. He was killed while making sure that the residents can escape from the fire.

Here Is Why You Should Be More Careful When Driving on Busy Los Angeles Freeways Today!

Sorry, Honda E. You Won’t Make It Big In The States