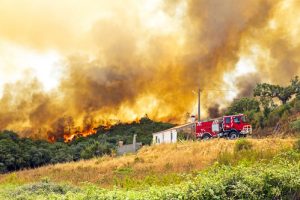 LOS ANGELES, California — As the heat continues in Southern California Tuesday, a small brush fire erupted mid-afternoon in the Hollywood Hills area near the Griffith Observatory.

The firefighters were battling the fire which was burning grass and light vegetation northwest of the observatory in Griffith Park. It had charred about 2 acres by 2:30 p.m., according to a Los Angeles Fire Department alert.

A large number of plumes of smoke was billowing up into the area behind several homes in the area.

The observatory was safely evacuated as a precautionary measure, though authorities indicated there was no threat to the landmark structure; surrounding areas were also being evacuated, according to Los Angeles Police Department Officer, Tony Im.

About 120 firefighters responded on the ground, while three helicopters were battling the flames by air, LAFD spokesman Brian Humphrey told the local news.

Light winds of about 6 mph were blowing in the area, but the fire was primarily being fueled by the topography, according to LAFD. By mid-afternoon, temperatures reached into the mid-80s, which while hot were significantly lower than the triple-digit heat that inundated the region last Friday.

“Low winds, high humidity, and downhill burn give LAFD confidence in their ability to combat it,” he tweeted.

There is no additional information whether the observatory would be reopened Tuesday. Dr. Ed Krupp, the Griffith Observatory’s director, said that decision would be up to the Fire Department.

The cause of the blaze is unknown and is being investigated.

A San Francisco Woman and Son Buried Under Snow in Kirkwood