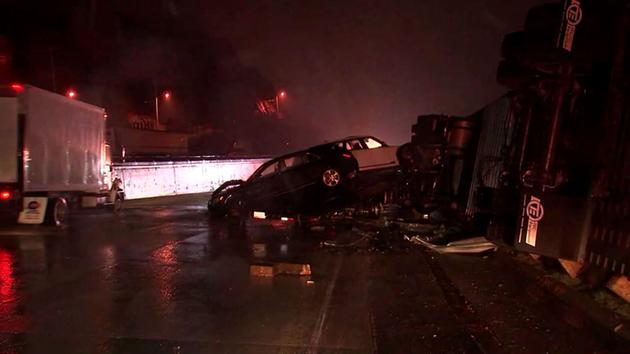 Around 3 am two separate semi truck accidents took place on the Interstate-5 near the Newhall Pass in Sylmar. One of the semi trucks was a car carrier and the other was carrying produce. The car carrier was transporting 3 vehicles, while the other semi was carrying about 40,000 pounds of apples.

The separate accidents happened right near the 14 freeway transition. They caused the closure of the southbound 14 freeway truck lanes that lead to the 5 freeway southbound lanes.

The produce truck ended up on its side, but thankfully no one was injured and there were no fatalities in either crash.

Authorities have reported that the lanes will be closed till at least noon since the spilled produce needs to be cleaned before the semi truck can be moved.

Accidents that involve trucks are a frequent occurrence in the United States and are a serious problem in California. Thousands of fatal crashes involve semi trucks across the nation, they are also a cause of crashed that result in very traumatic injuries.

Annually, many truck accidents are reported to have caused injuries

Annually there is about 338,000 crashes reported, which include

California is number one on the list of the highest number of recorded truck accidents in the last 10 years.

The leading causes of semi truck accidents include