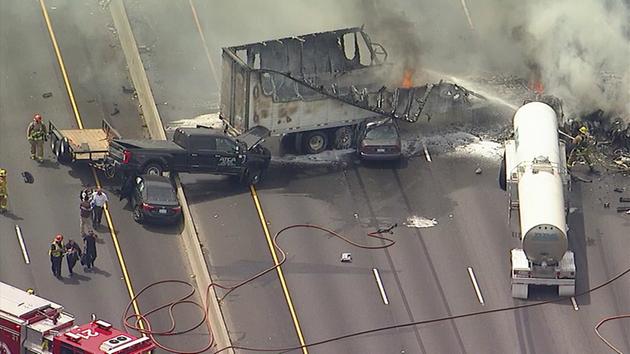 A fiery crash that broke out on the 5 freeway today became a reason for 1 death and 10 injuries.

The crash took place at about 11 am on the I-5 South Bound near the Colorado Exit. A box heading south lost control and ended up going over the center divider which triggered a chain reaction crash. The crash ended up causing a large explosion which called upon 75 firefighter from Los Angeles, Burbank, and Glendale.

Eight vehicles were involved in the crash. Three of which were commercial, one passenger van, and one truck. One person was pronounced dead on the scene and 10 were transported to receive treatment.

The victim was identified as a male, it is still unclear which vehicle the victim was traveling in. One 27 year old woman was critically injured on site. The other 9 who sustained minor injuries were in the range of 22-71 years old. A dog also died in the crash.

All southbound lanes were closed and traffic was being redirected to 134 Freeway West bound.

The southbound may remain closed till 10 pm but the rest of the freeway began to open up around 2pm.

Defense Bill is Overwhelmingly Passed by the Senate

Pedestrian Died Because of The Train Crash in Burbank